Does teeth whitening damage your teeth?

Professional teeth whiteners are safe, effective, and done under the supervision of a dental professional. In most cases, it is worth the extra cost to visit the dentist to get long-lasting, safe results. Yes, teeth whitening is very safe when done correctly. 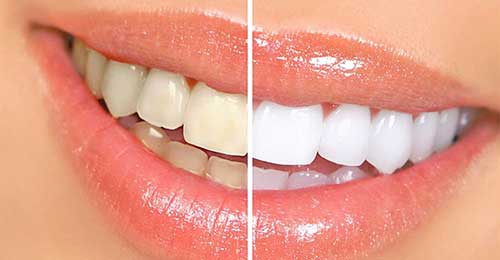 How do dentists professionally whiten teeth?

Starting the dentist will answer every question and doubt that you have before the treatment.
Initially, a protective layer for your gums is placed and then applied a tooth whitening gel containing between 25% to 40% hydrogen peroxide.
A protective layer for your gums is first applied, followed by a tooth whitening gel containing between 25% and 40% hydrogen peroxide. The treatment should last at least 60 minutes, or three 20-minute sessions, to achieve the best results. Using a special heating lamp for three 20-minute intervals, with the gel reapplied in between intervals. During treatment, the dentist keeps an eye on the situation and adjusts the treatment as needed to avoid tooth sensitivity.

Does professional teeth whitening cause sensitivity?

The sensitivity that the patient might have after the treatment will disappear after 24 hours and is the only side effect. This sensitivity does not occur in all patients; it depends on the tooth structure of the different patient; the sensitivity is different; some feel it more and others less.

Who can not have teeth whitening?

How often should you whiten your teeth?

The frequency of teeth whitening will depend on your starting tooth colour and your diet. If you maintain good oral hygiene and avoid consuming liquids or foods that release strong pigment (coffee, red wine, coffee, cigarettes, etc.) and do a dental cleaning every six months, then the results of whitening can last over two years. But some people have touch-ups every six months.

Why do teeth turn yellow?

Tooth stains are divided into external (extrinsic stain) and internal (intrinsic stains). The food we eat causes exterior stains, which are easier to remove with a bleaching treatment. While the interior stains could result from taking fluoride tablets as a child, tetracycline (tetracycline stain) could also be the cause. There are other stains that have genetic origins but are very rare.